With the Chicago Cubs winning the World Series for the first time in 108 years, die-hard fans Christopher Lenard and girlfriend Lindsay Fuhs did something that no other couple has ever done before — get engaged in front of the iconic ivy-covered wall at Wrigley Field while holding the World Series trophy.

It happened on Friday as five million elated Cubs fans from all over the city celebrated the end of "The Curse," the longest World Series drought in Major League Baseball history.

The young couple was invited to take part in the World Series Trophy photo op thanks to Fuhs' connections with the team. Her dad, Rick, is a scoreboard operating and groundskeeper, who has worked for the franchise for 38 years.

The couple also has close ties to Wrigley Field. This is where the couple first dated, and Fuhs worked as an usher at Wrigley for two years when she was in high school.

The Commissioner’s Trophy was brought to Wrigley Field so team employees and loved ones could enjoy a once-in-a-lifetime opportunity to pose with the once-elusive trophy.

In a video posted to YouTube, we can see the happy couple as they stand in front of the ivy in centerfield. Fuhs is wearing a broad smile, Cubs cap and Cubs National League Champions t-shirt while carefully holding the trophy. Her boyfriend — decked out in a Cubs jersey and Cubs cap — is standing proudly at her side.

Nobody is aware that he has a surprise hidden in the front-left pocket of his jeans.

At that moment, Lenard pulls the ring box from his pocket, gets down on one knee and proposes to his startled girlfriend.

"Will you marry me?" asks Lenard.

To free up her left hand, which is locked onto the precious trophy, a member of the Cubs promotion team steps in to assist. Fuhs turns her attention to her fiancé and new diamond engagement ring. 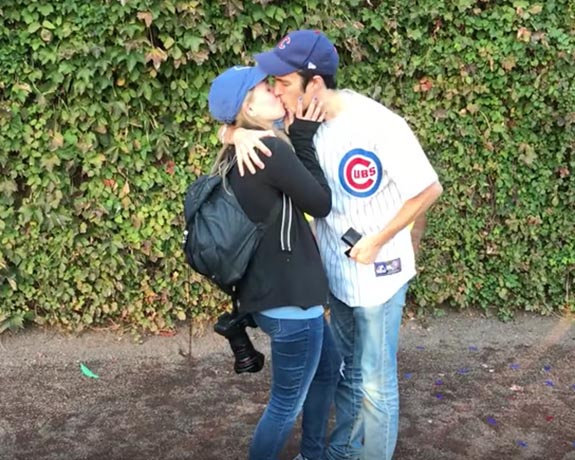 The couple kisses, embraces and basks in the glory of a Cubs World Series win and the prospects of an exciting life together. 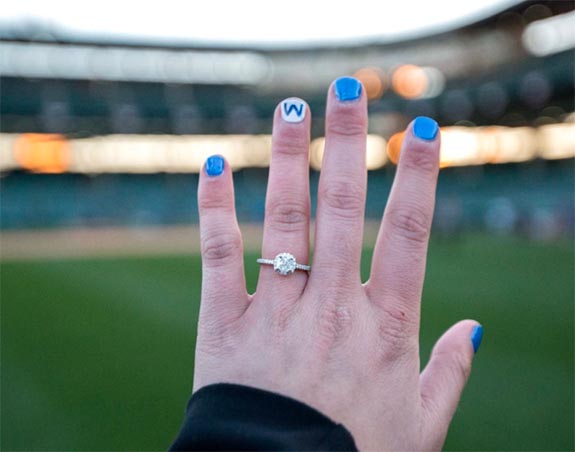 Fuhs documented her monumental day with more than 100 photos on Facebook. The couple's story has gone viral, with stories on USAToday.com, MLB.com, ESPN.com, Chicago Sun Times, Yahoo Sports and 63,000 views on YouTube.com.

The "W" on the nail of her ring finger resembles the famous "Win" flag, which Cubs fans fly as a symbol of their dedication to the team.

In explaining his motivation for popping the question at Wrigley Field, Lenard wrote on YouTube.com, "The Cubs won for the first time in 108 years and I decided to do something literally no one has ever done before."

It doesn't get much better than that.

Check out the video below...